Facing the audience, with a bottle of wine and a mascot squirrel between them, SMA President Julian Horton and conference organizer Anne Hyland began a roundtable on the ‘future of music analysis’. This took place at Royal Holloway, on the very last session of TAGS 2014, on 3rd March. Continuing some of his arguments from the keynote address of the previous day, Professor Horton stated that he believes music theory and analysis should become core subjects in music studies in the UK, and that students should also be aware of the ethical dimensions of the discipline. The problem, of course, is how we go about achieving this. The ensuing discussion focused at first on the ethics of theory and analysis, but soon turned to the more urgent issue of the survival and growth of the discipline itself in academia. The lowering of technical proficiency requirements at A-level were identified as one central problem. However, Julian argued that (as he learned in a national meeting with teachers and civil servants) raising A-level standards would diminish the number of students studying music as an academic subject at secondary schools, and therefore the number of those applying for music courses at university. Damned if we do or if we don’t, it seems. 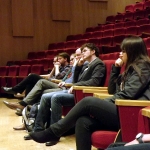 So the question went back to how we may raise music literacy in primary and secondary schools. After playing a simple example of invertible counterpoint on the piano, Julian turned to us with this question: why do we not teach such basic counterpoint to 12-year-olds who are perfectly capable of absorbing mathematics at a comparable level? Well, insofar as we should, the question was rhetorical. But it was both sobering and depressing to mull over the non-academic reasons for this. A point was raised about a cultural-political agenda that unfortunately identifies technical proficiency with social elitism (somehow math is exempt from the same association). And David Bretherton has argued that Music is the only A-level subject where private instrumental-vocal tuition is built-in by default, which means that most music undergraduates almost invariably come these days from better-off families, reinforcing the image of elitism. In other words, there is an expectation that private tuition will fill the gap, and this certainly applies to counterpoint, harmony and musicianship in general. The only thing that may break this vicious circle of social elitism and educational deficiency is a fundamental change in the perception of what music skills are for, which music skills should and can be acquired, and at what age.

All we need to do now is convince the government. Good luck, everyone.

Perhaps we can try and change things in our own patch first. At present there are hardly any designated jobs for analysts, so most of us get into university positions by being able to do other things. This is fine as far as getting a foothold in academia, and as Anne reminded us (and I can concur), once one is part of an institution there is some scope to expand analysis in the curriculum, slowly but surely. But growth by stealth may not be enough. Towards the end of the discussion, Horton raised the prospect of adopting here the American model of institutionalized music theory. The argument for this is that the discipline will be protected, it will create jobs, produce students, raise the overall level, create its own prestige (which hopefully will trickle down to secondary and primary education)—and so on. Putting aside how this can be actually done in practical terms, there was some skepticism from the audience (as well as Horton himself) about this idea in principle. After all, some of our colleagues in the US routinely lament the level of undergraduate literacy. So irrespective of innovation at the highest levels, it seems that the trickling down is not working terribly well on the other side of the pond. Moreover, others have noted that institutional music theory results in more formalist and conformist work that often propagates central theories rather than critiques them.

So once again we were left with no clear answers and as much as I wished for a happy ending, the meeting and conference cadenced on a troubling note. If anyone has further thoughts about any of these issues please feel free to join the conversation and respond to this blog.