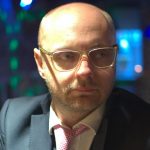 Kenneth is Professor of Music Theory at the University of Liverpool where he has worked since 2011, holding previous posts at Keele and Durham (where he completed his PhD in 2009). He lectures on various aspects of music theory in popular and classical repertoires. His first book, Skryabin, Philosophy and the Music of Desire was published in 2013, and his second, Desire in Chromatic Harmony, in 2020. He has published essays in academic journals on Alexander Skryabin, Karol Szymanowski, Charles Ives and Alexander von Zemlinsky, and on a range of music theoretical topics. In addition to his interest in Western art-music from the turn of the twentieth century, Kenneth combines music theory with continental philosophy and psychoanalysis. His next book, Listening to the Unconscious (2022), co-authored with philosopher Stephen Overy, explores psychoanalytic theory through a study of popular music. Kenneth also researches popular music theory, with a co-edited book (The Routledge Companion to Popular Music Analysis: Expanding Approaches, 2018) and academic journal essays on Arab Strap, Modest Mouse, and Suede.

Kenneth served as events officer for the SMA from 2010 until he was elected president in 2019.