The Analysis, Cognition and Ethnomusicology Conference took place at the School of Oriental and African Studies (SOAS), London, in the first four days of July. This was a joint Meeting of the Third International Conference on Analytical Approaches to World Music (AAWM 2014), and the Annual Conference of the British Forum for Ethnomusicology (BFE 2014). It was hosted by the Department of Music SOAS as well as the Institute of Musical Research (IMR) at Senate House, and associated with the Centre for Music and Science (University of Cambridge). The SMA’s involvement comprised of a some financial assistance and also being represented there by a special panel, which I will tell you about in a moment.

Why were we involved? AAWM was launched about four years ago and since then went from strength to strength. It is not exactly an organization in the formal sense as an interest group within the Anglophone (and so far predominantly North American) music theory and analysis community. It started as an international conference (see their 2010 CFP), and then expanded also into an online journal that has seen five issues since its launch in 2011. It has an impressive line-up of editors, advisers and contributors, many of whom made their name theorizing Western classical music (take a look). But both conferences and journal are part of a greater ongoing convergence among historical/critical musicology, ethnomusicology, music theory and cognitive studies that has accelerated in the last decade — a trend theorized in publications by Nicholas Cook, Georgina Born, Wim van der Meer and Laudan Nooshin among others. If these writers I mentioned represent different agendas, that is precisely because such a massive trend is pulled by different interests. Perhaps not every agenda is that friendly to the kind of scholarly activities that engage most SMA members, but I would argue that this trend is very good for our discipline.

Analysis has taken a battering in the 1990s, prompting several defences– memorably by Kofi Agawu in 2004 (Music Analysis, 23/ii-iii) and more recently by Julian Horton in a keynote address at TAGS 2014 (to be published soon in the SMA Newsletter). It is the inherent malleability of the discipline and the intellectual curiosity of its practitioners that nullifies such attacks in the first place. Moreover, many of us have already moved some time ago into studies of music from everywhere in the world, beyond the West vs. rest divisions. As institutionalized boundaries continue to dissolve, the systematic and rigorous analysis of music is no longer regarded, at least not by serious scholars, as some form of Western intellectual imperialism, to be kept with a barge poll away from the study of ‘non-Western’ music. If it were, then a joint conference of AAWM and BFE would have been all but impossible.

Nevertheless, some institutional divisions were still apparent through the simple fact that this was a joint event, organized by two different bodies with two different conference traditions. Panels did not mix: they were either based on 30-minute analytical papers, or 20-minute ethnomusicology ones. This says absolutely nothing about the excellent coordination and relations between the BFE and AAWM, and this being early days one can understand t7he practical, logistical difficulties of a more complete merger. But perhaps in future — perhaps with the SMA’s help — we can try somehow to integrate the two traditions in a single conference so that the boundaries are further dissolved, and delegates have an even greater chance to mix with and meet scholars across disciplines.

With over 100 papers spread over four days, a structure of four parallel sessions, three keynotes and concerts galore, t he organizers and formidable team of student helpers (with unforgettable tee-shirts) should be applauded for making the whole thing run like a well-oiled machine. But all this richness is also difficult to capture in one review: in fact, this is not the kind of review that should attempt such a thing. Looking solely at the more analytical part of the conference, papers theorized all manner of musical parameters across cultures from melody, harmony, rhythm, metre, sound/timbre and so on to ostinato patterns, cycles, improvisation, schemata and gesture. Familiar tonal theories, most notably pitch-class-set, Schenkerian, and generative theories, were put through their paces as they ventured beyond their cultural comfort zones. But if you really want to get a sense of the content you should take a peak at the programme and abstracts. As I mentioned, a more fulfilling review selecting a few papers and picking up more specific themes from this conference may be forthcoming: watch this space.

But I should get back to the SMA’s contribution. I explained why we were involved but not so much how. Apart from the sponsorship, we were represented by a special panel (no. 26 in the programme) entitled ‘Traversing Disciplinary and Geographic Continuums. As the title suggests, there was a fortuitous geographic continuity between my paper that focused on Transylvanian Gypsy-band music, Mark Gotham’s (University of Cambridge) which looked an Balkan music, and Costas Tsougras’s (Aristotle University of Thessaloniki) that applied (Lehrdhal’s) generative theory to the polyphonic singing tradition of Epirus in North Greece. Furthermore the middle (Mark’s) paper on metre and rhythm counterbalanced the two outer papers that concentrated on pitch. We also progressed from the near past (nineteenth-century and early twentieth-century repertoire) to the present. So it was a really nice, well-balanced and coherent session, I thought; and happily it was well attended and well-received too, with plenty of follow-up discussion, even if my time-keeping left something to be desired.

Anyway, this panel took place on day 3 of the conference by which time the SMA’s profile was already raised so to speak. As the panel’s chair I originally planned to speak a little about the SMA’s involvement when our session started and read out a message from our President, Julian Horton, to those attending our session. But fortunately, in an early meeting on the first day of the conference Richard Widdess kindly suggested I should address the whole conference in the more imposing surroundings of the Brunei Gallery Lecture Theatre, just before Nicholas Cook was due to give the first keynote. And so I did (see photo), which certainly meant we got more attention. I was also able to read out Julian’s message, now addressed to all of the delegates. It sums up, in more elegant prose, some of the points I have made above about the purpose of our involvement:

One of the happiest consequences of the pluralism that defines our present scholarly environment is a new rapprochement between analysis and ethnomusicology. Disciplines, which may in the past have seemed irretrievable distant, have come together over the shared territories of performance, cognition and expression; structural commonalities between the musics of widely dispersed cultural contexts have returned decisively to the research agenda; and repertoires that until recently seemed beyond the pale of analytical engagement are now comfortably within its purview.

The energy behind these developments is amply attested by this year’s joint BFE/ AAWM conference, which brings together an extraordinary diversity of papers around its theme of Analysis, Cognition and Ethnomusicology. I would like to take this opportunity to congratulate the programme committees of the AAWM and the BFE and the conference organisers. I’m delighted to offer the Society for Music Analysis’ wholehearted support, and look forward to many fruitful affiliation in the future.

In my view, this healthy growth that Julian describes above counteracts the shrinking habitat of our discipline in other fields. So when the AAWM came to town, as it were, all the SMA needed to do was seize the opportunity and signal our interest, show that we really do welcome analytical research ‘in all musical repertoires and cultures’ as our home web page declares. And so we did: sponsorship, panel and welcoming message–a good start. But the fourth aspect of our involvement is perhaps the most important, namely the ‘fruitful affiliation in the future’, Julian hinted at. It has already started, in fact, through informal networking during and after the conference, and will probably lead in the short term to some involvement with the next AAWM 2016. Expect more news to follow. 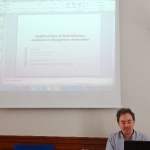 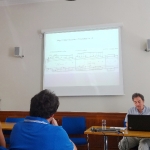 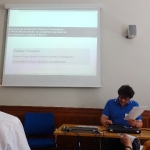 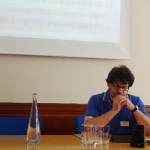